In a debut as a band and at Ashkenaz, the Mighty Mangroves represent a new generation of musicians in the lineage of Creole, Zydeco and Cajun musicians hailing from the Bay Area. The band features an eclectic mix of electrified traditional Creole and Cajun standards, soul infused Zydeco classics, and golden era R&B and Blues. Each member has a long relationship and love for Ashkenaz and brings the influence of world and folk genres into the genre as well as their individual tastes and playing. It is appropriate they make their debut at Ashkenaz, as they are distinctly a product of the historic venue. Also appropriately, they will bill joined by many local guests from the scene including Andrew Carriere, Steve Tabak and Andre Nigoghossian.

The bands leader (and one of Ashkenaz's own) Singer and Accordionist Max Lopez, has been steeped in the Bay Area Zydeco scene for more than a decade. As weekly Sound Engineer for the Tuesday night dance,  he is deeply embedded and immersed in the local scene and has learned from all of it's torch bearers. Studying diatonic accordion with Andrew Carriere, Marc Marcin, Billy Wilson and Blair Kilpatrick, he has learned the Bays own twist on the genre directly from the players who have kept it alive. But his love for the genre has also lead him to its source. Traveling to Louisiana, Max has studied with masters like Jeffery Broussard, and has steeped himself in the music of foundational artists like Amede Ardoin, Clifton Chenier, Boisec Ardoin, Canray Fontenot, and Danny Poullard as well as the music of modern players like Geno Delfose, Keith Frank, and Ed Poullard.

The Mighty Mangroves also feature Guitarist and Piano player Aaron Hammerman, and Rub board player and percussionist Dave Eagle. Together Aaron and Dave make up local Blues, Boogie Woogie, and R&B duo the Deep Basement Shakers. As a duo they seamlessly bring the influences of that project into the band; influences which inform the Zydeco genre as a whole to begin with. The Rhythm section is rounded out by Drummer Cairo McCockran and bass player Toho Saunders. Both charismatic musical figures, each brings their own related influences into the Mighty Mangroves sound. A well rounded and hard working local drummer, Cairo has held down the beat for Bay Area Swing Legends Steve Lucky and Carmen Getit as well as Bluesman Quinn Deaveaux. Cairo has also played in an eclectic list of other genres including a stint with the local Afrobeat band  Lagos Roots, and with Ashkenaz Kid's series favorites The Bug Family Band. Toho is a veteran and virtuosic Reggae bassist playing and touring regularly with many of the biggest names in the genre, and has frequented Ashkenaz as a performer and concert goer since he was a young child.

As a band the Mighty Mangroves are exploring the roots of Zydeco in all of its forms and integrating other influences to blaze forward. However, they always stay true to the rhythms that delight dancers. Combining French Music of rural Louisiana, New Orleans based R&B, Delta and Chicago Blues and Caribbean and World influences, The Mighty Mangroves repeat the adage "In this great future you can't forget your past". 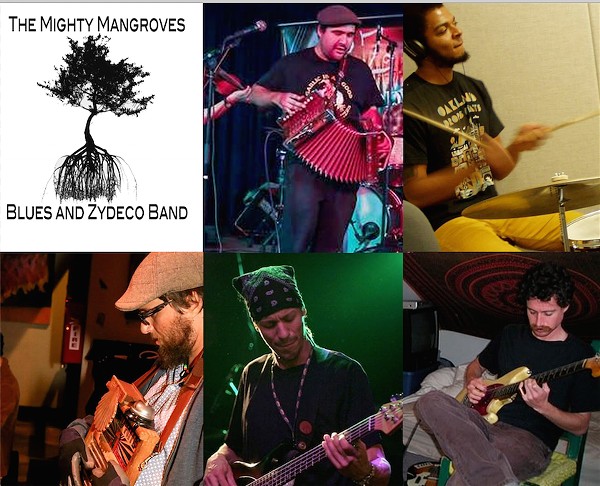